The Chinese zodiac was something I never really explored growing up. I knew that I was born in the year of the pig because we did celebrate Chinese New Year in my household, but that was it. The zodiac was just something part of the event for me and had not further significance. This week in class has led me to research what my zodiac animal means and the significance of the pig in various settings.

In today’s society, pigs as an animal are associated with terms that have a negative connotation, such as lazy, fat, and even dirty. This was how I first thought pigs were and contributed to my dislike of my own animal. However, the information I learned after some research changed my view and has made me embrace my animal. According to the World Animal Protection Organization, pigs are actually extremely smart and inquisitive animals that can display extremely complex behaviors. The pigs however are treated by farmers poorly, and they do not display the needed interactions they need due to being housed in close quarters and in small areas. 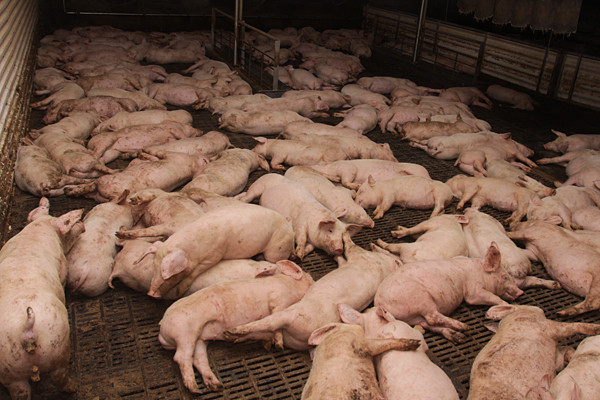 I looked up how pigs are used in bioart, and I came across the “Pig Wings” conducted by The Tissue Culture and Art Project at the Massachusetts Institute of Technology. In this project, they harvested the bone marrow stem cells of a pig. Using these cells, they formed cartilaginous and bony structures shaped CAD 3D mold in order to create semi-living wing structures. This project was interesting to me because it showed how our stem cells could be used to create structures that could be used for flight, and illustrated a possible different turn for vertebrate evolution. This also points to a future in which the pigs cells can be used to construct organs and and that semi-living structures may be used to improve the lives of humans everywhere.

Further adding to the usefulness of pigs, in class we saw a TED talk, in which a woman follows one pig as it moves through various places to understand how the pig is used in our society. It was crazy to see how resourceful humans are, using every part of the pig to create more than just a source of food, including soap, heart valves, and even bullets. We see the pig in almost everything we used these days, and it is so fascinating how much one animal can contribute to the world we live in today. What I believe is sad concerning the pig is that despite the variety of uses, the pig is not as respected. Similar to other animals, it seems that the pig has a price and to me that always seemed wrong. It has always bothered me how animals can be bought. All pets that we can possibly own can be bought for a price, from the rarest dog breeds to the smallest hamster. This idea has bothered me because it shows that there is a price for these animals, that even though their lives do have worth, it can be measured. But humans, though we are also a form of animal, often do not have a price, and most people in this day would consider it inhumane to put a price on anyone. Why then is there a price on animals?