Balance between Science and Art

This week in lecture we experienced an intersection between art and science with the Brainstorming project. In this project, EEG electrodes were attached to two participants. The participants actively tried to become in sync with each other in this project, sitting facing each other and wearing octopus crowns which turn a different color LED depending on the frequency of the alpha brain waves picked up by the EEG. When the colors on each crown are similar, it means that both of the people are on the same frequency and is termed in sync. It was interesting to see how art can be achieved even while taking empirical data, as done through the use of EEG within the project. This got me thinking about the different ways science and technology can merge, such that scientific discovery and metaphorical art can come together in a project and can find a happy medium in which both are satisfied. 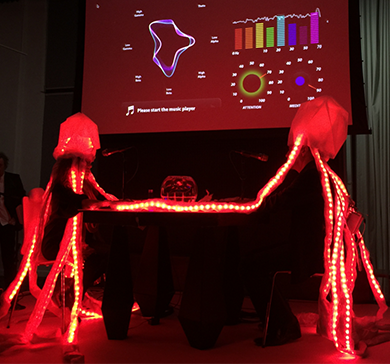 Above: Brainstorming in Action. Source: http://victoriavesna.com/images/gallery/2011-2020/Octopus_Brain_sm.png

I looked up different ways that art and science intersect in this way, and how both aspects were fulfilled in other forms of art and experimentation. In the “Pig Wings” project, it can be seen that stem cell research was combined with non-living materials, a feat that could revolutionize the shaping and growth of new biological tissues and organs, was used to create wing shaped structures that reminiscent of how the wings on mammals would look, had mammals evolved the capacity for wings. The beautiful wing structure was a metaphor of what could have happened to mammals, and possibly humans. This project has fulfilled both an artistic purpose and showed that a very serious biotechnological feat was possible.

Another project that I saw that exhibited a happy medium between science and art was the work of George Gessert on flowers. He revolutionized genetic engineering in plants, his work showing that the colors on flowers can be manipulated and controlled, which is his way of expressing the how humans aesthetic preferences affect the evolution of these flowers. His work has influenced the creation of color changing flowers, and a true blue flower, previously not possible in nature but possible through genetic engineering.

Why would we care about using genetic engineering for something as simple as the colors on flowers or the creation of wing-like structures? Why would we care if two people are in sync when connected through the Brainstorming project? For each and every person, the answer to these will be different but to me, it is because it is art and it is beautiful and shows that something like science, which the general populace do not really know, can be used to make works that are meaningful in the artistic sense. It raises the awareness of what we can do with biotechnology.

The main thing that impressed me about these projects was that it did not sway to become consumed by the science, or by the art. The projects found a way to satisfy both. Professor Vesna in lecture mentioned that in the Brainstorming project, it would be very easy to sway to one side or the other. It is just as easy to allow the EEG recordings to dominate the research and control every variable, but also to just forget the recordings and just look at the lights, the signs, and how everyone is feeling instead. Going forward with the project, I suggest that the interaction not be so free but those sitting at the chair actively try to do something, such as playing a game or doing a puzzle together. This could evoke the same feelings and experiences and possibly lead to higher sync rates.