The Art of Bread

The Art of Bread

Last week in HC 177, we began a delicious new topic: The art of bread.

Featured in this discussion was the Collective Bread Diaries: A Taste of Protest, an interactive art project by UCLA artist in residence, Haytham Nawar. His work studies the complex relationship between man, machine, and bread.

Deeply inspired by the Egyptian bread riots of 1977, Nawar decided to create an array of visual diaries of bread from artists all over the world, utilizing the crowd sourcing tool Amazon Mechanical Turk(MTurk), an online marketplace which pays people to complete human intelligence tasks (HITs). Nawar paid 15 cents per bread drawing and very quickly amassed enough drawings to compile into a collective of bread diaries. This was later expanded into an exhibition piece feature machine ROLAND: CAMM-1SERVO recreating these bread drawings before a live audience using vector files and a fine point sharpie. The final result was over 60 bread drawings beautifully replicated on a 10 m long sheet of paper.

Collective Bread Diaries: A Taste of Protest by Haytham Nawar

ROLAND: CAMM-1SERVO live performance, recreating drawings of bread before a live audience at the Art|Sci Center

Being a Christian myself, the topic of bread and religion immediately brings to mind the Holy Communion (or Eucharist). This is a reenactment of the Last Supper, in which Jesus “took bread, gave thanks and broke it, and gave it to [His disciples], saying, ‘This is my body given for you; do this in remembrance of me.'” (Luke 22:19). The Eucharist also includes wine but I will only be focusing on the bread today. Coincidentally, it is currently the Passover, so it’s the perfect time to discuss this!

The word “communion” is derived from the latin communio, meaning “sharing in common” and translates into the Greek word κοινωνία (koinōnía) in seen in 1 Corinthians 10:16. This highlights the role of bread as a symbol of “togetherness”. In my church, the unleavened bread is baked in one whole piece. During the Sunday meetings, the bread is broken to serve as a reminder of the way Christ’s body was broken during his crucifixion. The breaking of the bread is also a symbol of how though each member of the Church takes a separate piece of bread, it all came from the same original whole bread, signifying that each person is a part of the Whole, the Church as one Body.

Bread also appears numerous other times in the Bible, mentioned at least 492 times in the original languages. When the children of Israel were wondering through the deserts for 40 years before entering the Promise Land, God supplied them with manna (“bread from heaven”) (Exodus 16). When Ezekiel was to perform a siege on Jerusalem, he was instructed by God to only eat bread made of wheat, and barley, and beans, and lentils, and millet, and spelt (Ezekiel 4:9). In John 6, Jesus feeds a group of 5,000 people with just 5 loaves of barley bread and 2 fish. And perhaps one of the most memorable mentions of bread appears in John 6:35, when Jesus declares, “I am the bread of life; he who comes to Me will not hunger, and he who believes in Me will never thirst.”

In class we watched an episode of Netflix documentary “Cooked”, titled “Air”, which focused on the relationship between wheat and man. The most striking revelation from this episode was the apparent amount of revolutions that have started in some part due to bread. Because it is a staple food in so many cultures, spikes in bread prices can often lead to civil unrest, as seen in the Flour War of France (1775) and the Southern Bread Riots during the American Civil War.

Arab Spring was a series of pro-democracy uprisings in the Middle East that began in 2010 when Tunisian street vendor Mohammed Bouazizi set himself on fire as an act of protest. Preceding much of this political unrest was a spike in grain prices in 2007-2008, causing a 37% increase in bread prices. Bread price inflation, due to all the imported and exported ingredients of bread representing the global market economy as a whole, can be a good signifier of sociopolitical instability.

Bread is seen as perhaps the most essential staple food in the middle east. In Egypt, it is known as aish, meaning “life”. Bread serves a source of affordable sustenance to many, and is heavily subsidized by the government. So when bread prices begin to rise, the effect is immediate and far-reaching. It’s no stretch of the imagination, then, to see the correlation between the surge in bread prices and the riots that followed.

My favorite image from these riots was this Yemeni protestor wearing a helmet of bread to protect himself from police riots. Perhaps he was also making a statement of the bread prices and the necessity of bread as the people’s reliable safeguard against hunger? Or maybe he was just out of headgear options. Who knows. The only thing that matters is that he is now a meme known as “Bread Helmet Man”. 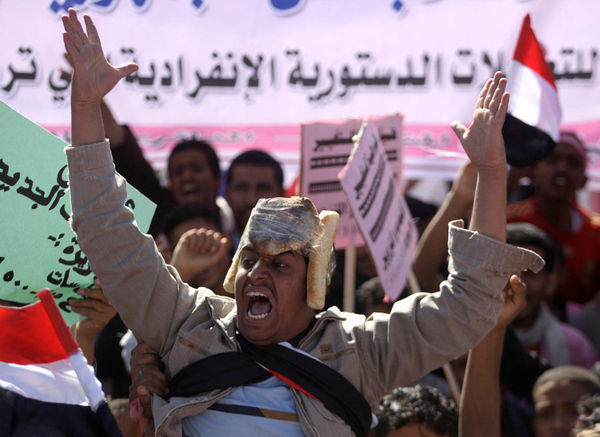 Now how could anyone have a discussion on bread without having some to taste as well? Professor Vesna gave the class wonderful samples of bread with almond butter and cheese. This is definitely my favorite type of class activity.

Bread and cheese. So simple yet so satisfying.

However, there is probably no better way to study food, than to make it. Now, anyone who knows me well knows I have an incredible talent for destroying kitchens. The measuring and pouring of ingredients reminds me a little too much of chemistry labs and it’s no wonder I’m bad at both, although I may actually be better at timing acid-base titrations than I am at knowing when to turn off the stove before my food becomes a wonderful shade of black.

That being said, all this talk of bread did bring up some long forgotten memories of an interesting AP Biology project we began once AP testing was over and all of us were biding our time until the end of the year. Sour dough baking!

Sourdough, unlike other breads which are made from commercial active yeast, relies on a wild yeast strain Saccharomyces exiguous. The sour taste is thanks to the acid produced by bacteria inhabiting the dough, rather than the yeast itself. San Francisco sourdough is touted for being exceptionally sour and yummy, and that’s not just NorCal snobbiness talking! It’s actually the work of a special strain of bacteria called lactobacillus sanfranciscensis, that exists abundantly in the Bay Area, but only there! Seriously it’s everywhere.

So how exactly did we capture this bacterial strain for our little class biology project? From our arms. That’s right. We all took a clump of dough and rolled it up our arms to get it smothered in all that good natural bacterial fauna. Appetizing, I know. But that’s how abundant the lactobacillus sanfranciscensis is in my hometown!

I was able to grow a nice starter and a few of the students in my class actually went through with baking their arm-germ originating sour dough bread. Personally, I did not. Mostly because I had absolutely no idea how to bake bread and was the tiniest bit appalled at the idea of eating my Frankenstein-ian bacterial creation.

I have never really liked bread much. But after such extensive research on it, I’ve come to crave it. I would really like to try baking bread again. Perhaps not with my arm germs since I’m no longer a San Franciscan. But any kind of bread! And if I do, I will most definitely update you on that journey.

“Bread in the Bible.” The Bible Study Site, http://www.biblestudy.org/bible-study-by-topic/bread-in-the-bible.html.

Zurayk, Rami. “Use Your Loaf: Why Food Prices Were Crucial in the Arab Spring.” The Guardian, Guardian News and Media, 16 July 2011, http://www.theguardian.com/lifeandstyle/2011/jul/17/bread-food-arab-spring.