A very interesting proposal, especially the artistic note behind embracing these materials in their failing form. I'd like to add more alternative materials.

This is an idea already spreading widely throughout the sustainable fashion industry, from companies like Algiknit to Biocouture. Algae is also an attractive option due it's wide variety of natural colors, from the red rhodophyta to the blue cyanobacteria. Increasing public awareness on the usefulness of algae will hopefully lead to greater concern for the danger algae is currently facing from ocean pollution.

Chitin is one of the most abundant polymers on Earth. It can be harvested from crustacean shells and is easily modable, making it multipurpose. Of course, the downfall of it being so biodegradable is that it also dissolves easily in rain, but this can be a part of the "failing" performance, embracing these natural materials in their barest essence.

While I applaud this proposal for its simplicity and practicality for a global issue, I have a proposal to make on the psychological impetus behind the project It is on the concept of "apocalypse fatigue" and social behavior behind why people don't care more about global warming.

This is an idea which I think is demonstrated best in sociologist Jeni Cross's Ted Talk "Three Myths of Behavior Change". She asks the audience which of these two pictures would be more effective in stopping people from littering: Picture A, which shows a pile of trash with the caption "This is the amount of rubbish that's been left around this bus stop since Monday", and Picture B, which shows an Olympic runner throwing away waste in appropriate the trash can. 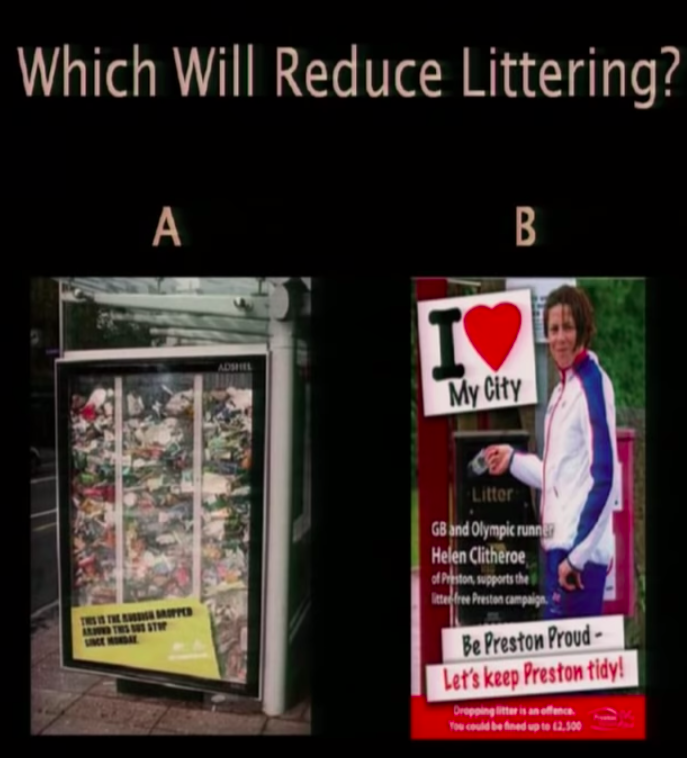 Most of the audience members, like myself, though picture A would be more effective. But research on human behavior shows that the most effective agent of behavioral change is watching other people do that behavior.

It's not that people aren't aware of the dire situation the Earth is in. When discussing the topic of global warming, the most common response I've seen is a general depressing acceptance. A kind of nihilistic shrug of the shoulders and "Oh well, guess we're doomed". We're so bombarded by bad news all day we feel overwhelmed, and then the response becomes acceptance instead of change.

I propose a different approach for this project. Since the screen is just a loop of images with a front and back, it's hard to distinguish which is the "before" and "after". The images could be easily misinterpreted as a bleak interpretation of the future if we keep polluting the Earth. Perhaps this would be more impactful as a series of images that progress from current day's bleak images to images of people picking up litter, leading to images of a cleaner and brighter environment.

There is also the option of making this project an interactive app, where people can submit pictures of themselves cleaning the environment. These pictures would go into a collective database that loops and is visible to all app users so we can all see the efforts and changes we are making. Yes, this proposal would dramatically change the complexity of the project, but I believe it would have an equally dramatic change in it's effectiveness.

The creator had several proposals for this project. My critique against proposal 2 (turning DNA into pages) is the impracticality and resource waste that would be involved. Though I can't exactly quantify the amount of DNA needed to make a whole page, I assume it would be a lot. If production involves using plant DNA of some sort, it may be less wastefull just to use trees as we usually do at that point.

Proposal 3 on the other hand, looked very promising. The concept of turning plant DNA into a musical score is both elegant and feasible. The idea that we may be able to give plants a voice to sing their life's song is absolutely beautiful. The main challenge of this proposal would be to figure out exactly how to interpret the DNA and transpose it into musical notes.

DNA is composed of just 4 nucleotides: Adenine, Guanosine, Thyme, Cytosine. It would be more difficult to compose music from 4 notes, unless they are being interpreted as chords instead. Even then, the music would be unbelievably long and boring.

On the other hand, there are 64 different types of RNA codons (groups of 3 nucleotides). Each codon codes for a different amino acid, of which there are 21 types in eukaryotes. This allows for much more variation and interpretation routes.

While there are only 12 notes in a full chromatic scale, we can perhaps interpret the remaining 9 amino acids as different types of rests and pauses, which many musicians would argue are just as critical to a piece as played notes are.