In class last week we discussed CRISPR. I had a previous journal entry talking about CRISPR babies for the HOX Zodiac week, so some of this may be redundant, but it's also a chance to delve into this topic further.

CRISPR stands for Clustered Regularly Interspaced Short Palindromic Repeats, and is a powerful gene editing tool. the CRISPR sequences are transcribed in RNA sequences (crRNA), which guide the system to a complementary sequence on the target DNA. The attached Cas9 enzyme then snips the DNA at that location , shutting the target gene off.

When the cells attempts to repair the DNA, it uses the new RNA sequence instead which the experimenter has engineered.

Below is an eloquent explanation of how CRISPR works.

CRISPRs were first discovered by Spanish scientist Francisco Mojica. His theory (which was later confirmed in 2007) was that these repeating gene sequences were part of the bacterial immune system. The gene sequences resemble the genetic code of past invaders and serves as a genetic memory that helps the archaea remember and destroy the invaders.

In 2013, the Zhang Lab became the first to publish a methodology for using CRISPR to edit mouse and human genome.

There are 3 main types of CRISPR-Cas systems: Type I, II, and III.

Types I and III are found in both bacteria and archaea, but type II is found only in bacteria. Type II is the most studied and best characterized, and uses the Cas9  enzyme as explained in the beginning of this article.

In my research I came to learn that there are multiple types of CRISPR systems, differing mostly in the DNA cutting enzyme. For example, sometimes instead of Cas9, Cas13 is used instead. Cas13 has a slightly more limited application, as it has been shown to cause collateral cleavage of surrounding RNA. This is useful for changing the RNA letter, but not quite for DNA knockout/replacement the same way Cas9 is. 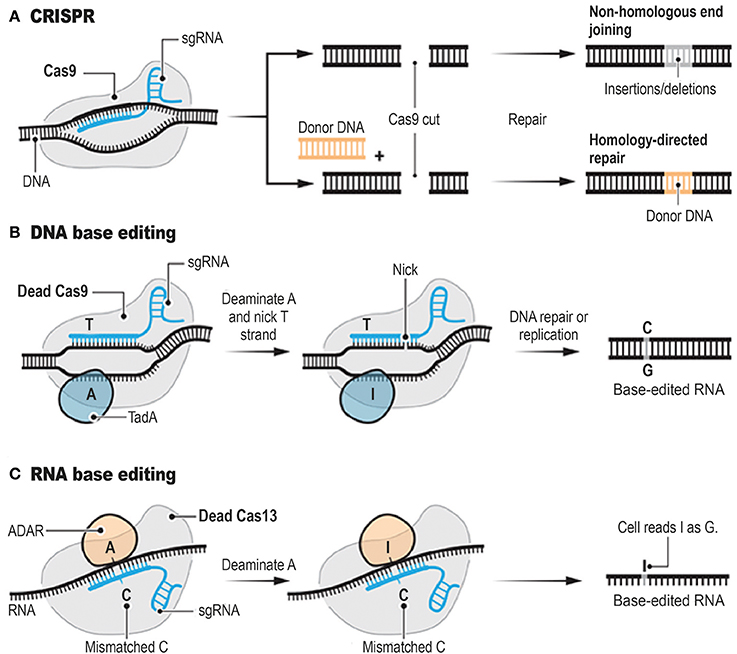 There is also a different type of Cas enzyme that has emerged recently: Cas12a (aka Cpf1). Cas12a has been showing much potential as a better alternative than Cas9 because instead of being comprised of 2 different RNA segments, it only has 1 is capable of the same functions as Cas9. This makes Cas12a smaller in size, making it easier to insert into cells. Unlike Cas9, which cuts both strands of the DNA in a straight line creating a blunt end, Cas12a cuts them in a staggered fashion creating "sticky ends". This increases the accuracy and specificity of gene insertion, as the inserted gene must match the sticky ends exactly.

There has already been many promising studies on using CRISPR as a therapeutic strategy. For example, a study from the Children's Hospital of Philadelphia released last month claimed researchers were able to thwart a lethal lung disease in a mice models using in utero CRISPR technology. Normally the genetic mutation which causes the lung diseases results in death within hours after birth. Using CRISPR, the mutant Sftpc gene was inactivated.

100% of untreated mice with this mutation died from respiratory failure, but the gene editing improved the lung morphology and survival of more than 22% of the animals.

In my last article on CRISPR babies, I thoroughly discussed my own apprehensions about the future of this technology and the possibility of a Gattaca-like future, so I won't reiterate myself. Unfortunately, mankind has always had a more "reactive" approach to problems, rather than preventative, so we'll have to see how this goes. But maybe it won't be such a bad things. If CRISPR technology has the potential to prevent deaths from lethal genetic diseases and improve our life quality, perhaps the risk is worth it? Again, only time will tell.

“What Is CRISPR-Cas9?” Facts, The Public Engagement Team at the Wellcome Genome Campus, 19 Dec. 2016, www.yourgenome.org/facts/what-is-crispr-cas9.