This past Thursday I tuned into the webinar, “Talking Trash: Cultural Uses of Waste”, hosted by the Center of European and Russian Studies (CERS). In this webinar, author of the book, “Talking Trash”, Maite Zubiaurre discussed and answered questions about her book. In Zubiaurre’s book, she discusses micro-litterscapes. In other words, she focuses on the small trash and litter, instead of focusing solely on larger garbage dumps. Specifically she speaks on the “uneasy difficult dance” between small and large trash. 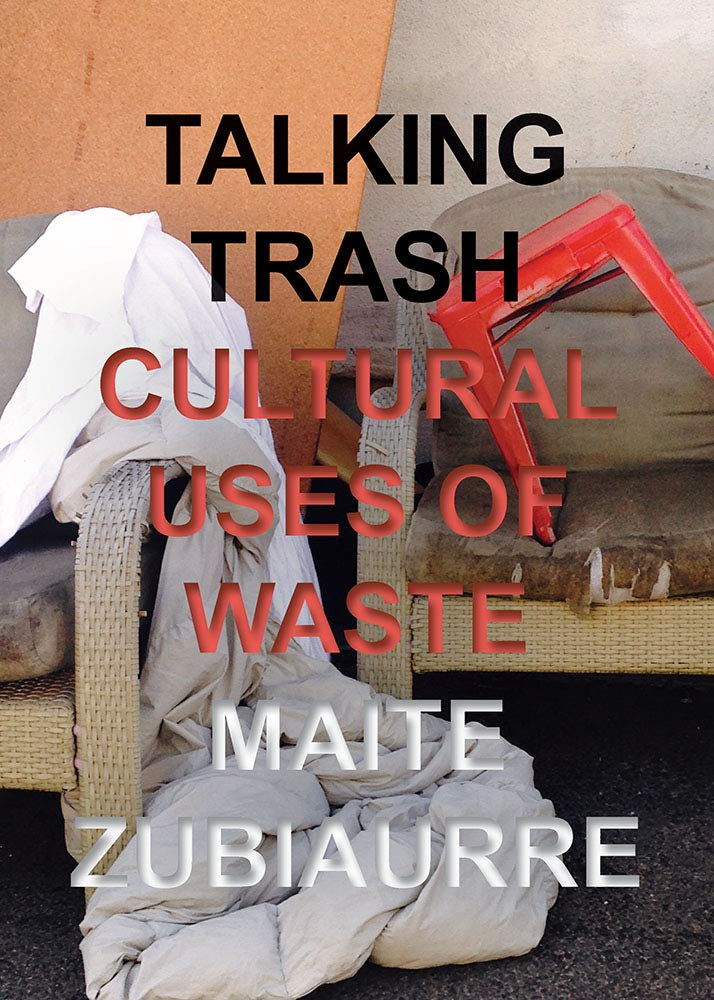 Charlene Villasenor Black, with her expertise in Art History and Chicana Studies made many interesting ties between Chicano culture and ideas about trash from Zubiaurre’s book. She discussed Rasquache art, a form of art that uses “leftover” or discarded trash in order to create new art. She showed many artists and art pieces to explain this point but two of the pieces that caught my eye were the bottle cap earrings and the art from recycled shells. Black explained how the shells that the artists used in their pieces were actually recycled from the pearl industry. Another point that she made that I thought was especially interesting, is she talked about the Aztech goddess, Toci-Tlazolteotl, who was said to turn trash into life. The intermixed nature of Chicano art and ideas of trash and recycling was quite eye-opening. Before this talk, I had never thought of bottle-cap earrings or shell mosaics as being made from trash, nor did I know that the Azetechs essentially had a goddess of waste and trash. 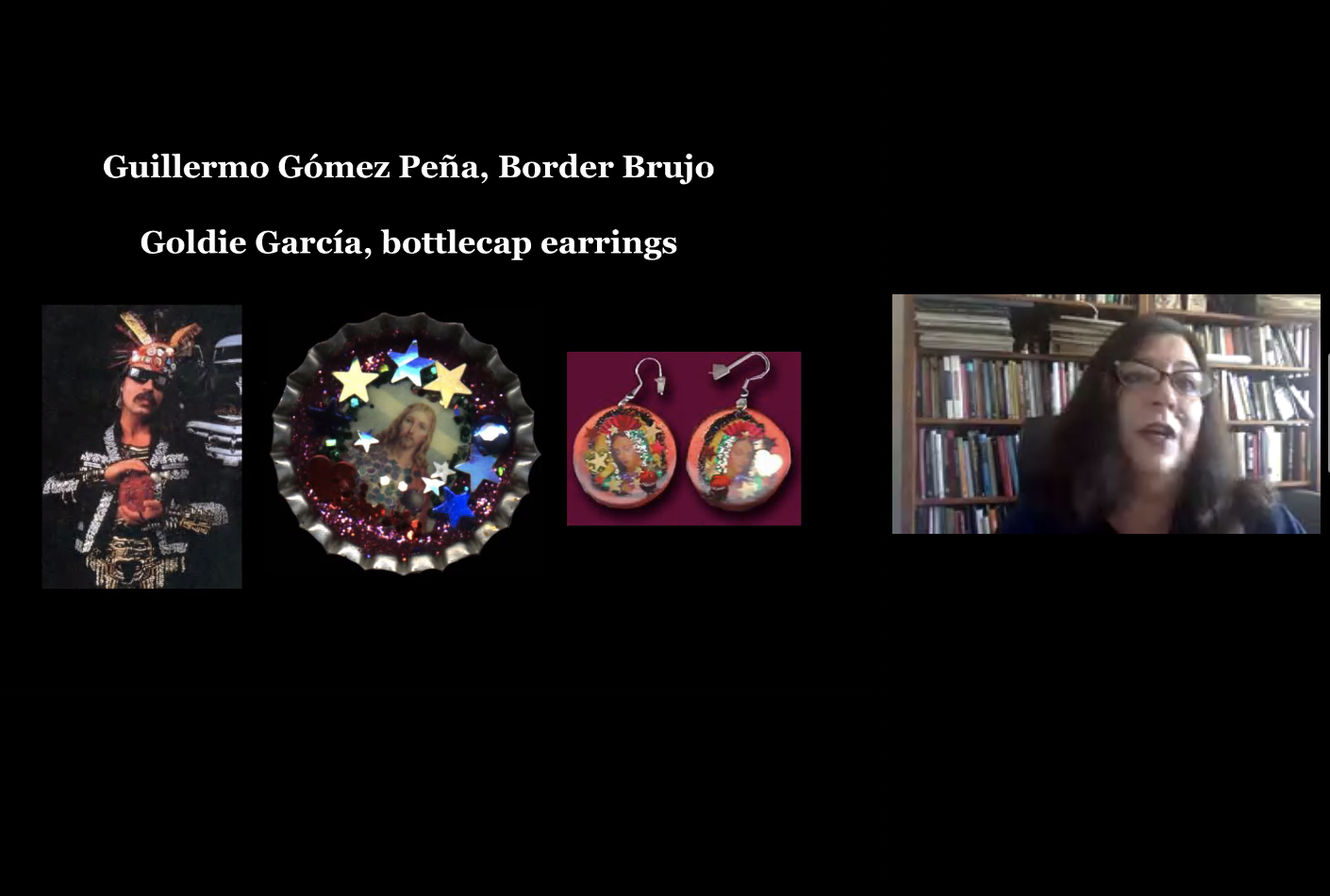 After Balck, the webinar switched over to Allison Carruth, who talked about trash from a more economic and environmental angle. One quote that she mentioned from Zubiaurre’s book that struck me was about the power of trash. She quoted Zubiaurre saying, “Trash is not born big” (Zubiaurre 61). In other words, all trash starts out small and the power that comes with trash comes only when enough small bits of trash accumulate into a much larger bunch of trash. In her commentary on Zubiaurre’s book, Carruth discussed both real and fictional trash environments. She talked about Puente Hills, the largest landfill in the United States, the “Pacific Garbage Patch”, and even WALL-E, the Disney movie about a little trash-compactor robot. I found her commentary on WALL-E to be particularly interesting. As Carruth explained, the entire plot of WALL-E is based around a humanized, non-human trash compactor robot, WALL-E, whose sole purpose is to process trash and lives in a landscape made up entirely of trash. The fact that trash could make up that much of a world is truly remarkable and turns trash from something rejected and dead into something else that is very much a part of life, especially for the little robot. 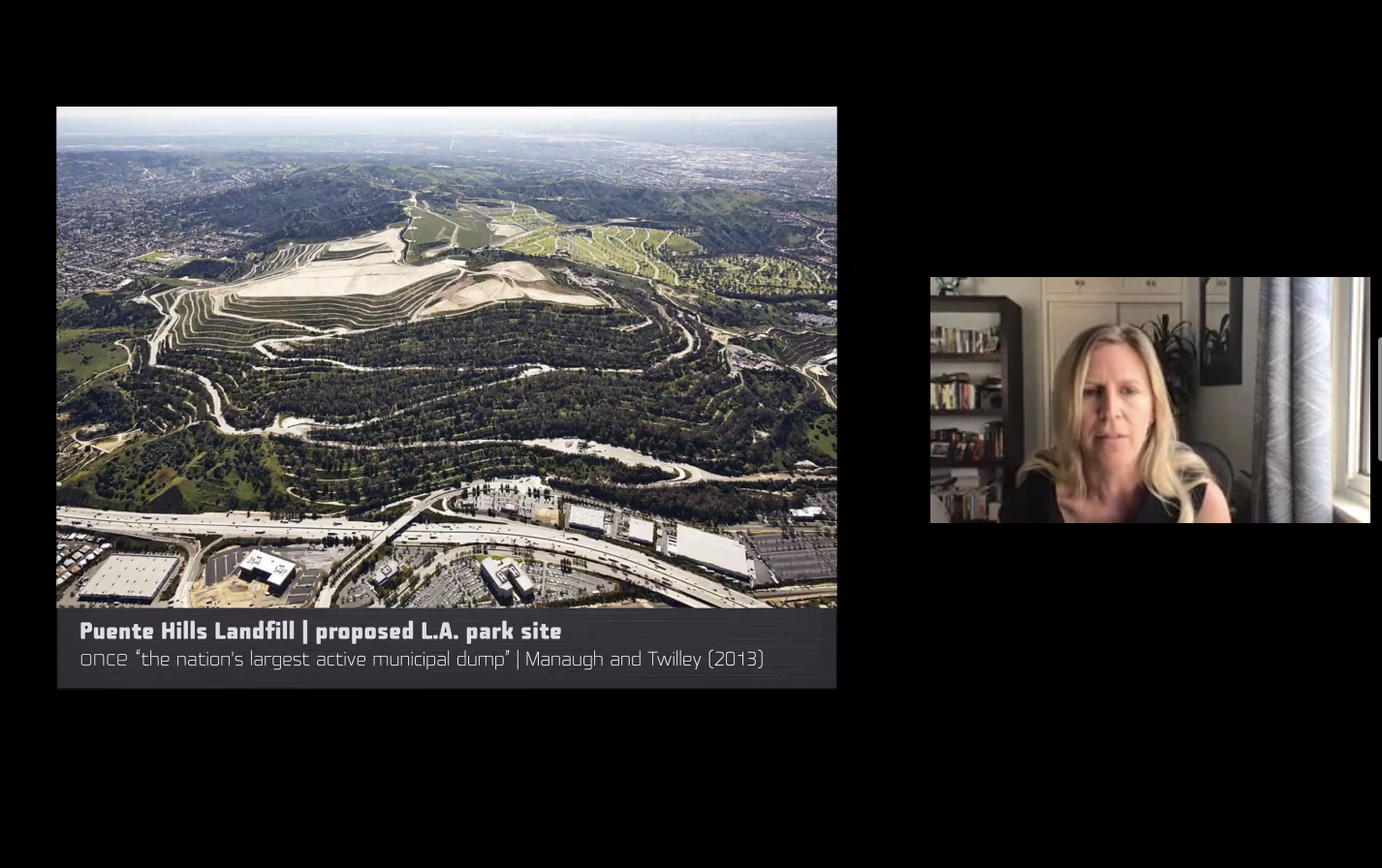 Both speakers also brought up the artist, Francisco de Pajaro, who created a “Garbage Monster” in order to raise awareness about waste. 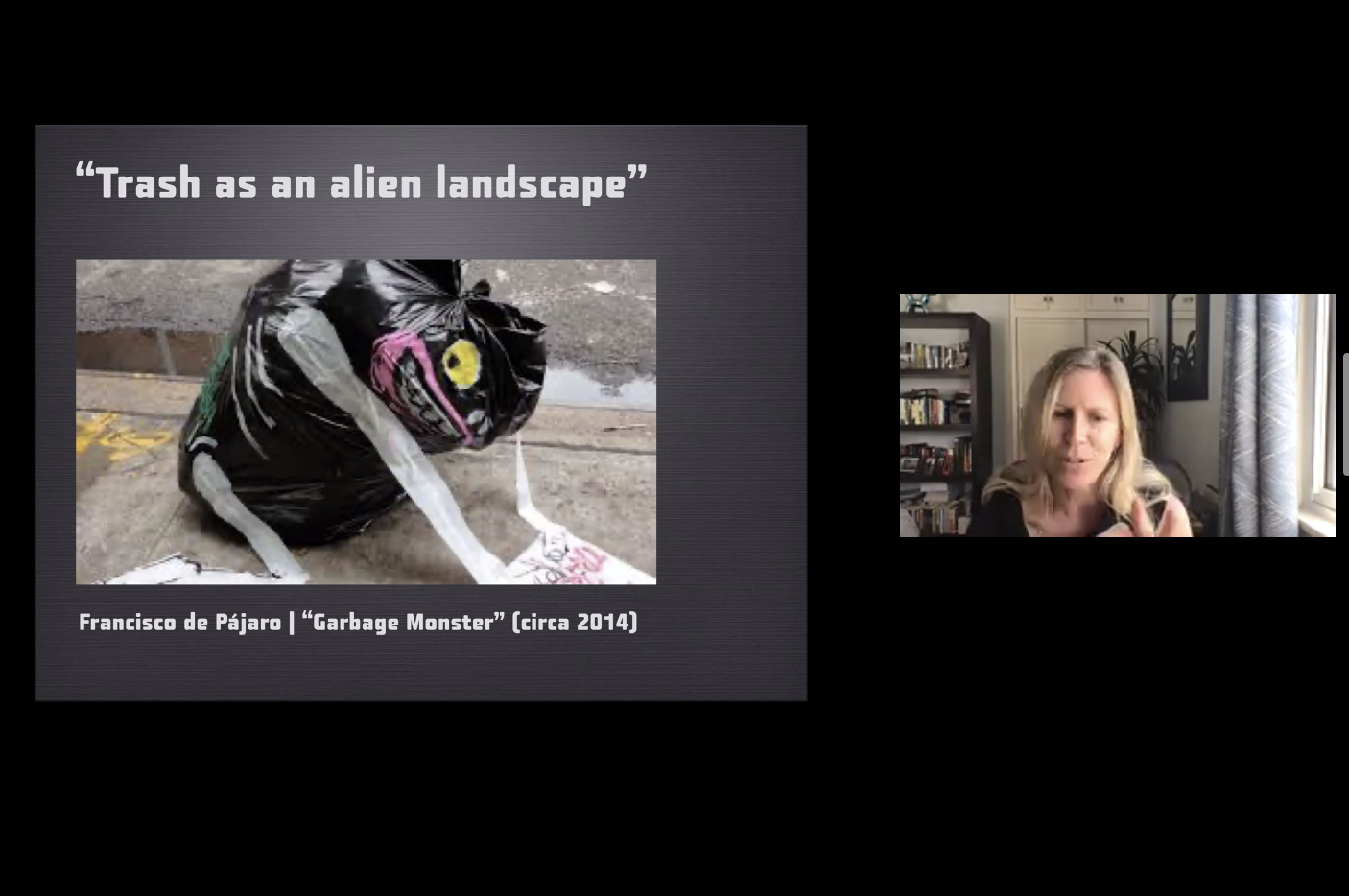 Later in the webinar, Zubiaurre talked more about some of the personal projects that she’s done in order to raise awareness about trash and waste. She included the quote “Slow down and look at trash: there is a narrative in each cigarette butt, and narratives trigger empathy”. One of her big points was the importance of using empathy as a way to motivate change in people. In one of her personal projects in fact, Zubiaurre put googly eyes on trash and spread her little creatures all over the UCLA campus. Through a class she taught, she also did trash awareness projects in the form of a trashion show, trash monsters, and even a trash parade through UCLA. 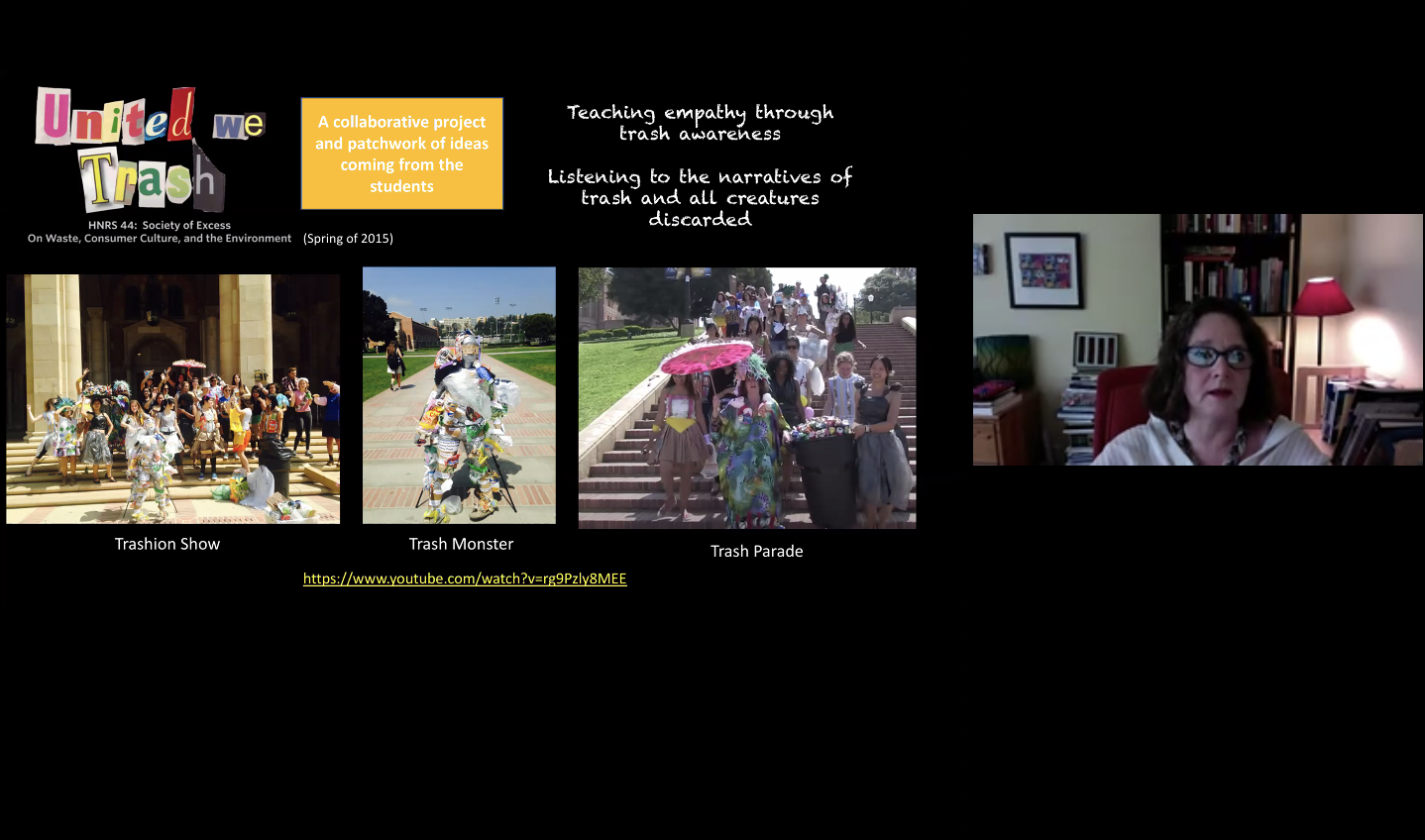 Zubiaurre concluded her talk by discussing another project of hers called “The Wall that Gives” in which she painted over a mural that had been defaced and created a small nook where she places tiles that she has decorated for other people to take. She explained how this was her way of giving back to her community and adding something positive to the world. 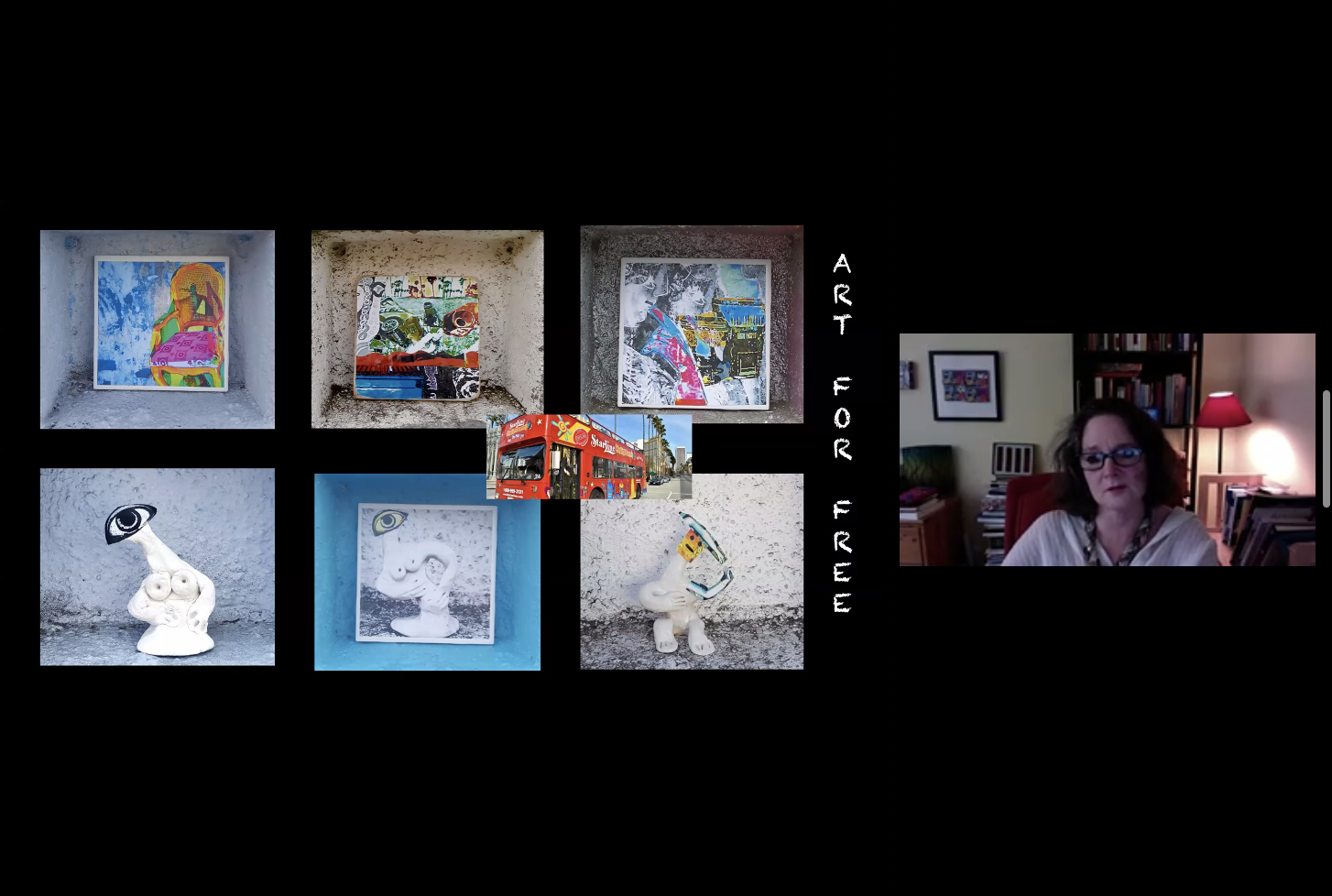 All in all, I found Maite Zubiaurre's webinar to be very eye-opening. I had never thought much about small trash nor did I think that so much social justice could be accomplished through art such as when Zubiaurre used anthropomorphism to add character and googly eyes to trash.