Updates on our group project:

As part of the sounding group, I can confidently say that we have created a pretty strong line-up for presenting our work. Justin will first present his work on his discussion of the environment, sound and silence. My work will be presented next on the importance of performance and “musicking” during the age of COVID-19. Noah will then present his sonifications and applications of COVID as a whole. Finally, Clinton will also present his sonic creations. Justin and I will also partake in performing by playing our violins during some parts of the sonifications created by Noah and Clinton.

Music, often described as organized sound, plays an incredibly important role in our lives. It allows us to feel emotion and express ourselves. It allows individuals to come together who listen or play the same music and create collective memories. Although a great sense of remoteness exists across our global community, individuals have found ways to overcome this boundary to create and strengthen the sonic spheres of music around the world. Through the performance of music, even from a distance, our experiences with music in the digital world allow us to create meaning in the world around us.

Music and Its Meaning:

The meaning that music entails and creates, or the lack thereof, has been a constant philosophical area of interest for many musicians and philosophers alike. One of these musicians includes John Cage, who was a postmodernist composer and founder of the phenomenon of experimentalist, or chance music. Postmodernism was an aesthetical belief and sensibility that questioned the existence of music and sound. The main principle of postmodernism encompasses the following question: what defines music? Postmodernism further tested the limits of musical existence. The music addressed the meaning to exist in the subjective experience of the listener or the audience and the performer. Cage believed sound to be more of an abstraction, and the meaning of sound, even purposeless sound, is created when we listen. He tested the sonic limits of what sound can be and what it can mean for the listener, independent of what the composer has intended. Cage states that “a sound does not view itself as thought...it is occupied by the performance of its existence." He also thought that through listening to the sounds of the everyday, we just might prefer those sounds instead of the sonifications heard during a musical program (Carroll 93). Therefore, music does not have to entail a meaning of its own, as Cage mentions. We can create meaning and give value to certain experiences that provide a sense of curiosity to the everyday. Whether listening to music online platforms or simply playing instruments within our own homes, we are able to create the stage that allows us to “musick.”

Christopher Small, who is a musicologist, educator and author, coined the term “musicking.” This term “musicking” allows music to not only be defined as an entity, but transgress into something further, an action. We can participate in musicking by playing music or simply just appreciating its existence. In the words of Small, “the fundamental nature and meaning of music [lies]...in action, in what people do” (8). This supports the notion of breaking barriers between us and them, the performers and the audience. We are all capable of partaking in “musicking” and do so almost everyday. Although social distancing has truly changed the way by which we partake in music making and listening, digital platforms have also supported the continuity of creating cultural memories.

Cultural memory explores the idea that we are able to create our past and remember the present through our shared experiences. As Jan Assmann emphasizes it is through performances which symbolize the core of a ritual that individuals form a collective cultural memory, which is both dramatic and corporeal in nature. Performances allow for the creation of cultural communities within dynamic microcosms. Our ability to form memory, especially in the form of cultural memory, is carved by our strong nature to relate the past with the future. In fact, it is these very sonic experiences that allow us to participate in performances, or as Assmann calls it, rituals, through the animation of our collective cultural memories (3). Although the situation of COVID-19 momentarily remains adamant in its form of existence within the relative past and the present, the revival and reimagination of its meaning can be created through performance.

The combination of both neural and social emblems of created memory helps individuals engage in this shared ritual. To form a collective, music can become one of the most effective tools for individuals of a created community to take part in this ritualistic performance. A form of “bonding memory” is created through these performances (5). Through this physical act of performance, individuals are reviving memories that have no support in everyday life and creating new bonds with the individuals they are performing with. It is through the performance of music and other artistic mediums, such as dance and art, that allows the memories of the past to be revived as part of the present day that create both a corporeal and dramatic dynamic. Although we are influenced by the current situation, the presence of a collective memory across the world allows for the imagination of new ideals and creations that take up new meanings that may previously not have existed. Memories of past sounds help create the trajectories for the present. Our understanding of sound and creation of cultural memories is influenced by the ways in which we may perceive sound.

Although music seems to gage our auditory perception the most, music can affect the way in which we perceive time. When understanding how we perceive the world, our thoughts and ideas about what we observe can be modulated by music (Jolij and Meurs, 2011). Specific musical elements, such as tempo and the dynamics, can create time distortions as well. With a faster tempo, time may appear to go faster than with music with a slower tempo (Droit-Volet et al, 2013). Just like our perceptions with space can change with new remote environments, our perceptions of time can also be altered, allowing us to morph into an alternate sonic space.

The common disturbances seen on digital platforms when interacting with musical concerts or live streams online include the internet lag that create distortions of the music. This, in turn, changes the ways by which we become receptive of sound. It is almost as if life around us has paused for a split second, and we are diverted from the sonic existence of the performance. Although we do not know when life will return back to “normal” (or if it ever will), the lens of music will allow individuals to create strong communities past the boundaries of social distancing on different platforms. Music provides the opportunity for individuals to find continuity within their lives, especially by participating in the performance of music.

~How do we perceive live and recorded music?

Incorporation of Performance in Art: (further area of research)

To further extrapolate the meaning of performance in meaning making and art, I wanted to explore some past art and musical exhibitions that incorporate performance. One of the prominent pieces I was influenced by include the "Blue Morph" exhibition, which allows individuals to become one with art (Vesna). Sound artists, like Samson Young, are able to create abstractions with sound in art exhibits. Similar to Cage’s philosophy, the listener is able to create meaning to the sound. The listener becomes the philosophist by listening to the music and make sense of its meaning. Furthermore, Bill Fontana uses sound as a sculptural medium. He believes that at any moment of one of his works there is something meaningful to hear.

Implementation of Musical Projects to the Current Day:

~Sonification of the COVID protein:

Through the use of sonification, scientists at Massachusetts Institute of Technology each amino acid a unique note in a scale using artificial intelligence (Venugopal, 2020). Further understanding the structure of the coronavirus, even through music, can help to identify certain locations where antibodies or drugs might be able to bind. This protein’s music could also be compared to other sonified proteins to further identify the structures and similarities among them. Composer Markus Buehler also explains that representing the virus in terms of music may also help individuals understand the complexity and intricacies of the virus, lending towards the need for further investigation and understanding of its existence (Roberts, 2020).

One of the first global displays of music as a source of therapy during these days of the pandemic was experienced by a part of the world at 11:00 AM, March 20, 2020 (CNN, 2020). The roaring sound of the Italian national anthem played, as the citizens of Italy leaned against their balconies and window sills to partake in this collective activity of singing the Italian national anthem. The anthem, as a symbol of the nation and a poetic artwork, is constantly being reimagined by the people who perform and receive it. Although an anthem belongs to a certain nation, partaking in the act of listening to and appreciating music helps individuals to break the boundaries of borders, countries, and continents. Music allows us to redefine our present while the future helps us to reshape the meaning of music as well. It is through these sonic experiences that cultural memories grow stronger and musical creations take up new meanings that may not have existed yet.

For those of us who are fortunate to have balconies, individuals have created stages within the premises of their own homes. Individuals are performing on their balconies for their neighbors and those who are just passing by and able to listen. The audience may choose to listen as they wish, and create meaning from its existence in the present day.

Live-streamed performances are also a unique experience for individuals across the world. Given the inevitable existence of internet lag, our perception of the music, and therefore time, are continually shifting and evolving. Within our UCLA community, UCLA students participate in the “Concerts at the Kitchen Table” series, where they have live performances to raise money for the World Central Kitchen to help individuals have necessities. On a more global scale, the European song contest, Eurovision, has also been canceled due to the pandemic. However, individuals meant to perform this spring participated in Eurovision Home Concerts that were showcased on platforms like Youtube. Orchestras across the world, from New York to Paris, have also created performances of their orchestras playing and creating music.

Even though physical limits have been placed that have removed most in person events and performances, the digital platform at our expenditure has allowed individuals to experience music, even live music, within the safety of our homes. The audience is able to become part of the creation and the performance during livestream performances. Even by participating in the chat of the livestream, encouraging our fellow performers, or simply just dancing in our living rooms, we are all able to participate in music making and creating meaning through the creation of cultural memories. Performance becomes a collective activity that entails the strengthening and creation of imagined, digital communities that seem so close in nature.

No Artistic Endeavor is Unnecessary:

Technology has become the link for us to engage in performance and meaning making through “social” interaction. Anna Dimitrui, whose work is on invisible microorganisms, believes that studying what interests us, even what is thought to be unnecessary such as music and art, may lead us to the solution of COVID-19. If we listen closely to our surroundings, we just might hear the meaning of the musical sound around us. Let us redefine the existence of sonic limits and reimagine our communities through music. 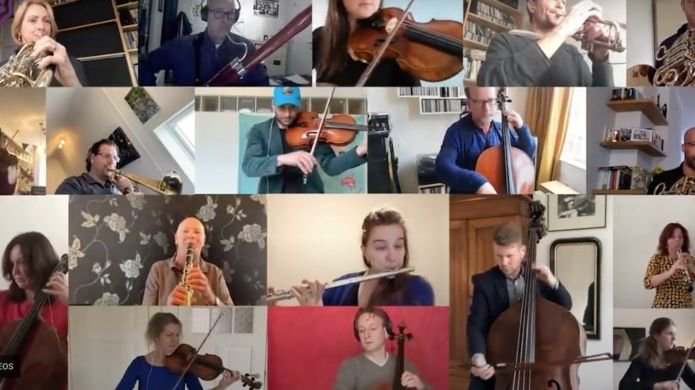 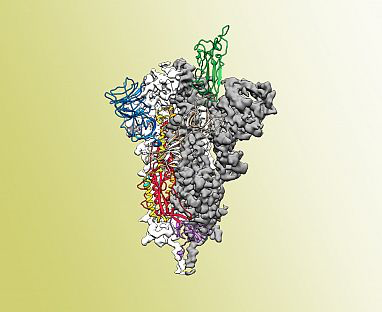 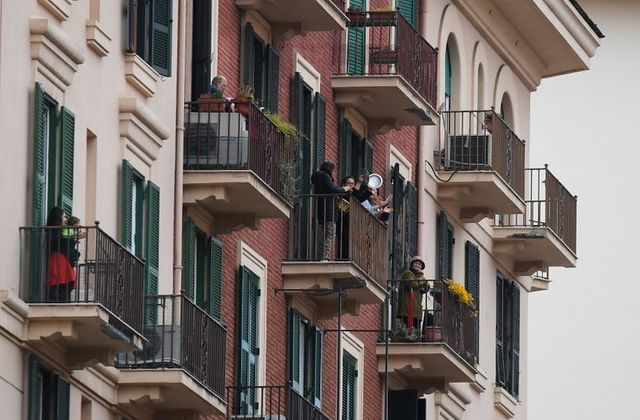