As a bread fanatic, the Week 3 lecture sparked within me a genuine interest in yeast and its properties. What is the scientifically explained difference between “good” and “bad” yeast? The history of the Black Plague from lecture and its strong link to alcohol fermentation also fascinated me, so I decided to write about the history of alcohol throughout the world.

My target audience is the average person who may not know much about yeast. My goal is to bring to light the ways in which yeast plays a vital role in our lives. Below is a rough draft of my research so far. I will keep adding more thoughts as I continue writing my final paper. One idea I have which I can potentially add is the point in time at which yeast evolved the ability to ferment sugar. I am currently still searching for the answer.

Growing up, my impression of yeast was that it is harmful and I should avoid it. I always heard about yeast infections, and I held a negative view on yeast. As I grew older, however, I discovered that there are also good types of yeast. For example, in baking, I learned that yeast helps bread dough rise. I witnessed this phenomenon when I baked bread using yeast for the first time during Week 3 of this course.

According to Global Health Trax, a benevolent species of yeast, is called Saccharomyces cerevisiae, otherwise called baker’s yeast. S. cerevisiae is responsible for the rising of bread dough, and it is the yeast that we used to bake bread with in Week 3. Meanwhile, a type of harmful, pathogenic yeast is called Candida albicans. Like the S. cerevisiae, C. albicans is in the Saccharomycetaceae family of fungi. It lives in the human body, but is only safe in small quantities (Global Health Trax 2020). According to Pallavi Uttekar, MD, if overgrown in or on the body, this yeast can commonly cause infections in a variety of areas: the mouth, skin, nails, esophagus, blood, or female reproductive organ (Uttekar 2020). 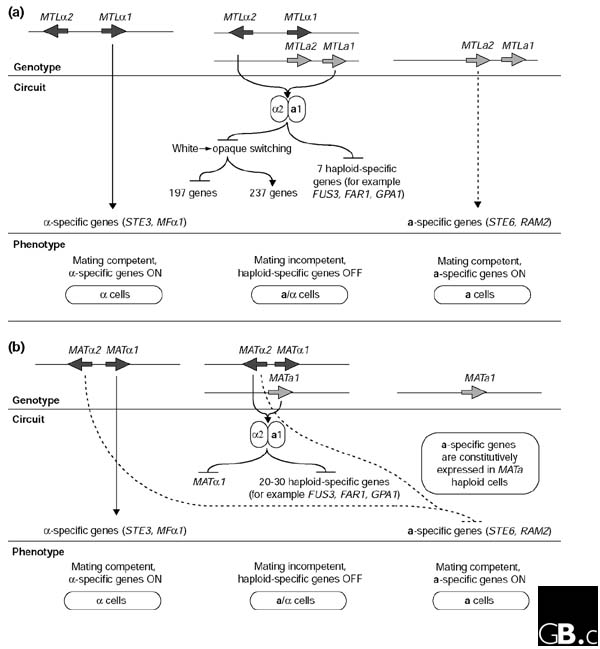 What is the one factor that greatly divides the S. cerevisiae and C. albicans, despite the fact that they are both from the same family of fungi that evolved from the same common ancestor 200 million years ago (see Figure 1)(Dashko et al. 2014)? What is the one difference that allows for C. albicans to evade our immune system? The answer may lie in the genetic evolution of its mating type circuit. Figure 2 illustrates the mating type circuits of C. albicans (a) and that of S. cerevisiae (b), respectively. As shown in Figure 2, the genotype and phenotype of these two yeasts are nearly identical. The major difference lies in the circuit. Tsung et al. (2003) state that “C. albicans a and α cells must undergo a ‘phenotypic switch’ from the white phase to the opaque phase before they are competent to mate… This switch is governed by the mating type locus: two homeodomain proteins (a1 and α2).” As shown in Figure 2, the phenotypic switch present in the mating type circuit of C. albicans is absent in the mating type circuit of S. cerevisiae. Tsung et al. (2003) speculate that “C. albicans has developed this additional layer to more closely control mating, a likely necessity in the hostile environment of a mammalian host.”

Tsung et al.’s speculation makes sense: in order to be favored by natural selection, C. albicans must have needed to evolve in such a way that allowed for survival inside of a mammalian host. This new development for survival was the phenotypic switch. Without this switch, C. albicans, a pathogenic yeast, would not have been able to control mating to such an extent. As a result, it would have had more difficulty evading a mammalian host’s immune system and possibly become extinct. Unlike C. albicans, S. cerevisiae never needed to evolve in such a manner because it is not a pathogenic yeast, and it does not have to mate in a hostile environment. What makes C. albicans harmful is a more complex mating type circuit compared to S. cerevisiae which allows for successful mating in a mammalian host and evasion of the immune system, especially one that is weakened by AIDS, poor health, or another reason. Due to how easy it is for this pathogenic yeast which lives within us to mate and evade our immune system, we must be extra careful with our health so we can keep this yeast at a safe, low quantity and avoid an infection.

Fermentation of Yeast and Its Significance in Civilization

Fermentation is the process of breaking something down anaerobically. Baker’s yeast, S. cerevisiae, can not only make bread dough rise, but it can also ferment sugar in foods and create alcohol as a result. Alcohol plays a universal cultural role today and has done so for thousands of years. The earliest documented evidence of alcohol is pottery jars with alcohol residue from northern China in 7000 to 6600 BC (Wagener & Thomas 2019). Wagener & Thomas (2019) elaborate on how people have utilized alcohol throughout history. China distilled spirits with alcohol and drank alcohol during rituals, celebrations, and holidays; they also used it for medical purposes such as relieving headaches or preventing colds. Alcohol was believed to maintain overall health. In ancient Greece in 2000 BC, winemakers established vineyards, and alcohol was used as an offering to the gods. Similar to China, people in Greece used alcohol for medicinal purposes. In 17th century England, the gin industry was starting to get popular after British soldiers were introduced to gin by the Netherlands. Lastly, in America, “the Founding Fathers had an affinity for alcohol, and colonial Americans drank throughout the day, preferring cider, beer, and eventually rum… By the end of the 17th century, Americans began heavily consuming rum” (Wagener & Thomas 2019). It can be observed that throughout history and across continents, alcohol was not only a drink for celebration and leisure, but also a tool that served several purposes. It could be used for religious, spiritual, or medicinal purposes as well.

Yeast is more than meets the eye: it is an organism that lives in our bodies (C. albicans), but it is also a vital ingredient for alcohol and bread (S. cerevisiae). Although it goes unnoticed most of the time, yeast plays a universal role in human civilization recreationally, religiously, spiritually, and medically.